The Miller Dairy Farm Master Plan is intended to guide the future development of this historic property.  The plan is conceptual in nature, allowing for changes and modifications as new opportunities arise. It is intended to provide a comprehensive framework for the arrangement of numerous and varying uses that are taking place or are expected to occur on this site.  The plan will allow a variety of uses while complimenting and minimizing conflict with one another. 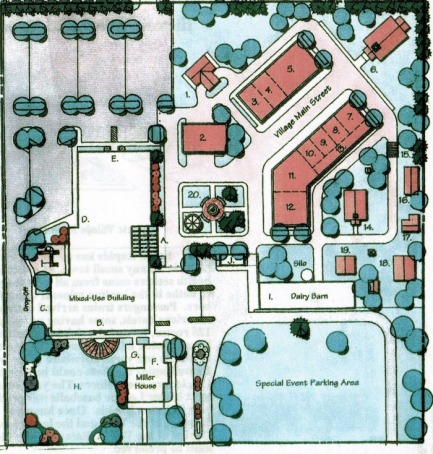 It all began in the winter of 1983 with a conversation between friends Mike DeGrow and Larry Holley, a former mayor of Eaton Rapids. Their conversation was about Miller Ice Cream, which was started in Eaton Rapids in 1896, and had recently been sold to a  Bay City company, and was no longer produced here. The historic Miller house had been abandoned for years, the property neglected, and was in danger of being destroyed, and so these two decided that something needed to be done to preserve this unique part of Eaton Rapids' history.

In the spring of 1984 a committee was formed, called the Eaton Rapids Community Heritage Foundation.  The committee made plans to move the house, since the new owners of the property wanted it moved or destroyed.

In 1986 the Foundation was incorporated and received 501(c) tax exempt status as a charitable organization.

On May 27, 1987, the house and just the property is sits on were deeded to the Foundation.  With a major commitment from the group to restore the house, the work began!

In September, 1988, the remaining property and buildings were donated to the Eaton Rapids Community Heritage Foundation.  For several years the Foundation conducted extensive fund-raising efforts to restore the property, and over $260,00 was raised.

With those funds, and extensive volunteer help from the community, the house received fresh paint, a new roof, a new furnace and air conditioning, a health-department approved kitchen, wall and ceiling repairs, new carpet and draperies.  An apartment was created over the garage and porch area for a caretaker/renter.  The barn received a new roof, foundation repair, siding replacement and repairs, and the entire barn was painted and proudly re-lettered.