In 1864, while the Civil War was raging in the South, pioneer Joel Latson built this home.

John & Rebecca Miller purchased it and 116 acres in 1874.  They moved their family here from Lansing, as they felt their farm on the present site of the Mount Hope Cemetery would soon be too near a big city.

Their only son Dennis and his wife, Minnie, renovated the home in the 1920's to accommodate their growing family and to make office space for their expanding ice cream business.  A second story was built over a portion of the house which added two bedrooms.  A kitchen porch was added with office space above.  Pillars were added to the front porch, modeled after George Washington's Mount Vernon home.

Later, in 1955, a partition was removed making one large living room.

The Miller family lived in this home from 1874 until it was deeded to the Historical Society in 1987.  There were several years it stood empty after George Miller, the son of Dennis Miller, died.

After George's death the Miller Ice Cream business, along with the house, barn and out buildings, were sold to the Kenny Dairy Company from Bay City.  Later Kenny Dairy moved the ice cream business to Bay City and donated the property to the Historical Society.

The house received a new roof, paint, wall paper, carpet and draperies and was completely furnished with items donated by the residents of the Eaton Rapids area.  The front porch and pillars have been replaced using donations from local supporters.  All the windows were donated by Care-Free Products out of Charlotte. 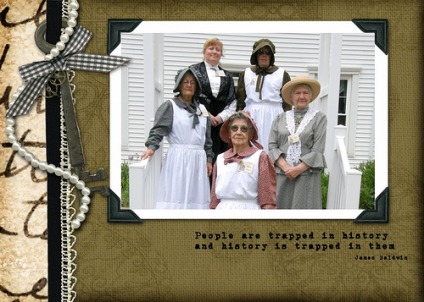